← Back to Kevin's newslettersPublished: 2020 Jan 8

Hope y'all had a wonderful holiday!

Much of my holiday was spent on my robo-saw project, specifically a high speed light detection circuit for the positioning system. (Check out my research notes.)

When I started debugging the circuit, it quickly became obvious to me that I’d forgotten nearly everything I’d learned in my one-semester junior lab a decade ago.

Peeved by this stark evidence of dozens (hundreds?) of hours of undergraduate effort lost forever, I decided this second time ‘round I should learn things properly. In particular, it seemed a perfect situation to employ the spaced repetition method described by Michael Nielsen. (tl;dr: Record facts on flashcards and review 'em on an exponential time schedule to burn them into memory.)

I’ve played around with spaced repetition few times over the years, but only for trivia. Re-learning electronics is the first time I’ve tried the technique to memorize something I actually want to understand. So far, the experience has been quite enjoyable.

I suspect much of that enjoyment comes from a tangible sense of progress. There’s the satisfaction of recalling a flashcard, sure, but much more satisfying are the intellectual achievements such groundwork enables.

For example, after memorizing, which sides of a diode are the anode and cathode, it was much easier to analyze them in circuits (not to mention inserting LEDs into a breadboard correctly the first time 'round).

Then, after memorizing filter and op-amp equations, I found I started to develop a visceral understanding — I’d be able to look at circuit and mentally chunk components together as part of some high-pass filter or source of bias voltage or whatever, without having to tediously run through the algebra.

Now, with this nascent visceral understanding, I’m able to move beyond debugging to synthesizing entirely new, alternative circuits, which is where the real challenges and satisfaction lay =)

By forcing me to memorize “boring” facts, spaced repetition helped me progress to a level I doubt I would’ve accomplished from just Googling forum posts and re-reading the relevant sections of electronics books.

(Curiously, last time I felt this kind of skill development was when I first learned to do the snatch, an Olympic lift that involves a series of very coordinated movements, which I practiced piece-wise for weeks building up to the complete lift.)

All that tax garbage I mentioned the past few newsletters? I’ve written it up, along with broader financial planning notes on retirement.

This might be old news to many of you, but for the rest it could have a lifetime value of a few hundred grand so I thought it’d be worth mentioning.

tl;dr you need portfolio of about (annual expenses / 4%) to retire. (Assuming no ruinous personal expenses, massive upheavals in the world economy, etc., etc.)

E.g., if your expenses were like mine last year — $50k — you could live entirely off the interest of a $1.3M portfolio that averaged a 4% real return.

$1.3 million isn’t nothing, but if you’re reading my newsletter it might not actually be a lot — I have several nerd friends making north of $500k+. So, uh, consider moving to San Francisco, working at a big dumb tech company for a few years, and then doing whatever you want for the rest of your life.

Or don’t, because you love your job / city / lifestyle. But run the numbers and make a decision: You’ll either end up with an extra $100k in your paycheck or have made a conscious choice that you’d rather pay that kind of money to maintain your current baller life — either way, total win in my book.

Besides, running the numbers is a great excuse to learn Excel and use my bird-themed expense tracking app.

I was at a coffee shop last week and an older gentleman fell and cracked his noggin open. It then occurred to me that I could be more prepared for these sorts of situations.

Half an hour of searching “First aid tips Reddit” gave some good nuggets (always add “Reddit” to get past the listicles and dying-media-outlet garbage that dominate these sorts of searches):

Of course, none of this is medical advice (though the sources were all highly upvoted).

But if you see me in person, feel free to hit me up for nitrile gloves, aspirin, a packet of honey, or some cookies from a 2017 Delta flight that I’m saving for a true emergency.

Since you made it to the bottom, here’s a picture of the robot I built last weekend: 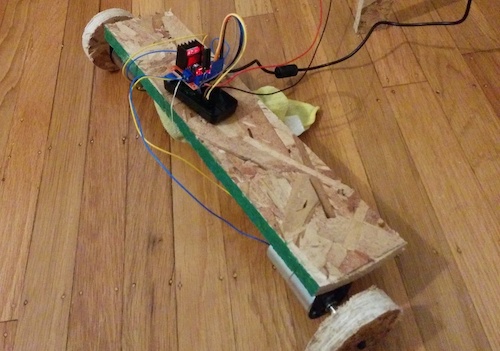 As you can clearly see, it’s hella dope. More on it next time.